All SME Down Thrust Bearings are “Kingsbury” type bearings. These bearings create a wedge of water between the surface of the carbon and the stainless steel pivot shoes due to hydrodynamic forces. These bearings are “heavy duty” and will give years of service with negligible wear.

SME has conducted extensive research and development to ﬁnalize the designs of the range of thrust bearings that are currently used in SME motors. SME have a Thrust Bearing Test Rig that can load the bearings up to 12 tonnes while running the bearings at 2P, 4P, 6P, or 8P speeds. When the bearings are under test, SME can monitor the input power to the motor driving the bearings as well as the temperatures. The data recorded is used to produce graphs of the thrust bearing power absorbed vs the thrust load, (see graphs below). The bearings are also visually monitored during the tests through the glass view ports at the front and sides on the test rig. Sample videos are available for viewing on the SME web site. All bearings, except the 6″ bearing, have been loaded to “in excess” of 10 tonnes without failure or damage, which is more than double the rated load. SME have also trialed a large number of different thrust disc materials before selecting antinomy impregnated, and resin impregnated, carbon is the best material for the SME thrust disc. This material has a high load carrying capacity and almost no porosity. SME have also trialed different materials for the pivot shoes and have standardized on a special stainless steel that is heat treated to 52 Rockwell hardness. The shoes are ground and lapped to within 3 light bands. 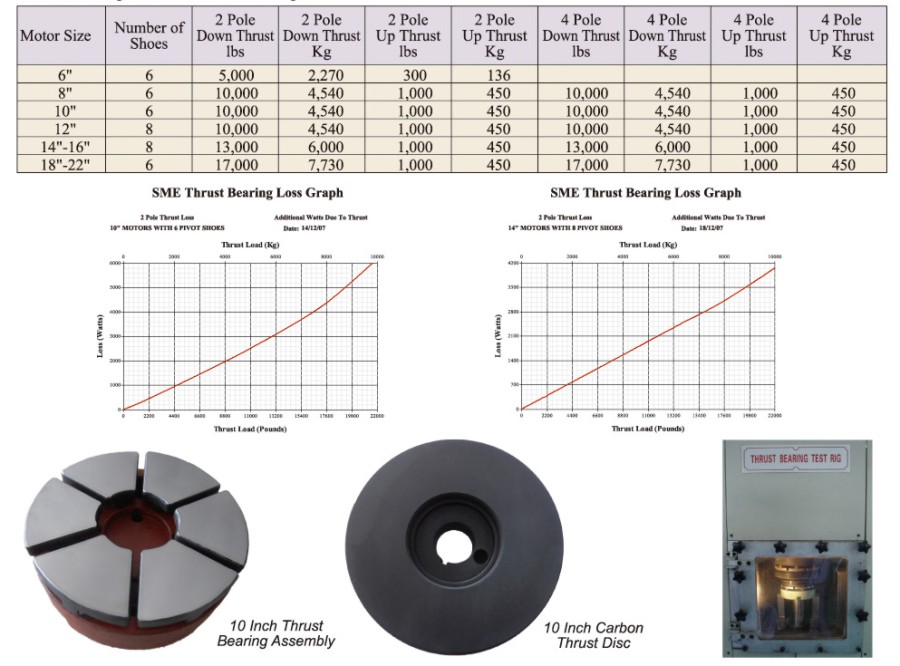